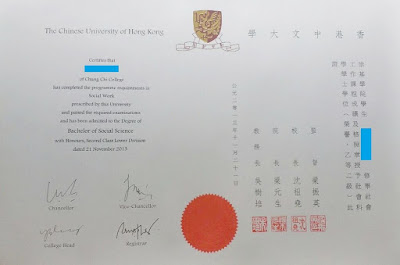 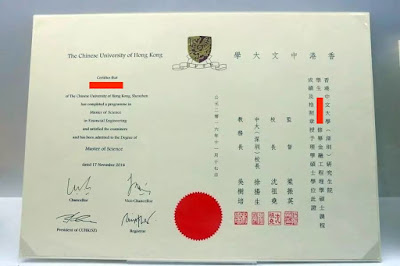 As is stated in the HKFP article:
The graduation certificate of the Shenzhen institution puts “Chinese University of Hong Kong” at the top, without mentioning Shenzhen. It says graduated students are of the CUHK (SZ) in the main text, and features the names and signatures of Xu Yangsheng, president of CUHK (SZ), underneath.
The certificate also includes the names and signatures of the top officials of CUHK in Sha Tin, including then-chancellor Leung Chun-ying, Vice-Chancellor Joseph Sung, and Registrar Eric Ng.
“The graduation certificate should mention ‘Shenzhen’ at the top, and state clearly that the Shenzhen University is involved with the school,” Lam told HKFP.

Yet the criticism also reveals that the alumni understand neither the establishment of CUHK Shenzhen as a legally independent Mainland university, nor the role of CUHK or its provision of degrees.

So lets clarify a little here.

When establishing a Sino-Foreign Joint Venture university, it is most common that students recruited to UG programmes at these JVs will receive TWO degrees upon graduation: a degree from the foreign partner and a degree from the newly established JV university.  So TWO degrees upon graduation for undergraduate students recruited through the Gaokoa exam.  Except…….

CUHK Shenzhen is one of TWO exceptions to this case, the other being University of Nottingham Ningbo China (UNNC).  For CUHK Shenzhen and UNNC they both issue only the foreign degree, from CUHK Hong Kong and University of Nottingham UK respectively.  They do not issue a second degree from the newly established JV university.  The foreign degree they issue is fully recognized in the People’s Republic of China and by approved by the Ministry of Education.

While mainland students enroll at CUHK Shenzhen, they are enrolling on a programme where the degree certificate is issued by CUHK Hong Kong.  If this was not the case, CUHK Shenzhen would never have likely received approval as a JV.  Perhaps as a joint institute within Shenzhen University.  It would also never have been permitted to charge RMB90k+ in tuition fees for a PRC degree: this would have been capped around RMB35k-40k by the Provinicial Pricing Bureau who approve tuition fees for Chinese universities including those charged by any and all Sino-Foreign collaborations.

That CUHK Shenzhen students will be issued with only a CUHK degree upon completion of their studies is clearly stated on the publicly available Ministry of Education licence agreement record for CUHK Shenzhen which was posted in 2014. 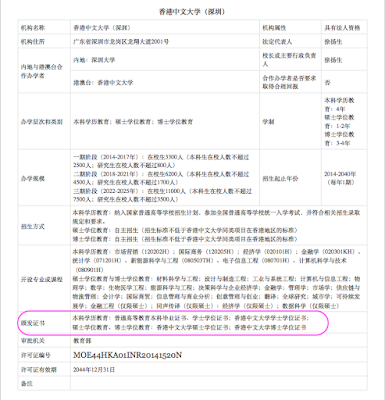 CUHK Alumni, in making this rather snooty criticism of CUHK Shenzhen, have failed to understand what their alma mater has established across the border from Sha Tin.  It is essentially a franchise college of CUHK on the mainland.  CUHK Shenzhen is, legally speaking, not part of CUHK in Hong Kong.  But all students at CUHK Shenzhen are enrolled on CUHK degree programmes and CUHK can issue those degrees. In fact, CUHK Shenzhen must issue hong Kong degrees conferred by CUHK to its students as a condition of their licensing by the PRC Ministry of Education: this is exactly what CUHK Hong Kong signed up for when they agreed to establish CUHK Shenzhen in partnership with Shenzhen University.

The concerns smack of a sneering elitism amongst the alumni, and it feels a bit like Hong Kong elites turning their noses up at Mainland “locusts” again. Moreover, rather than getting into a strop about whether or not this will diminish the worth of their own degree certificate, it would have been a much better demonstration of alumni spirit to instead congratulate their fellow alumni in Shenzhen: the Inaugural CUHK Shenzhen Graduating Class of 2017.