I'm pleased to announce a forthcoming edited volume from Lexington books.  The volume entitled "Western Higher Education in the Middle East and Asia: Politics, Economics, and Pedagogy" will be released in early 2017 by Lexington Books, an imprint of Rowman and Littlefield.

I have contributed a chapter on Chinese-Foreign Cooperatively Run Schools (CFCRS), providing a detailed analysis of the landscape in officially approved Sino-Foreign HE collaborations approved between 1991 and 2015.  This covers 1150 agreements between Chinese and non-Chinese universities for the delivery of 1445 degree programmes at the UG level and above.

The volume provides contributions from a number of scholars actively working in and across the global HE environment, bringing perspectives on transnational education from inside the the institutions and environments which constitute the focus of this volume. 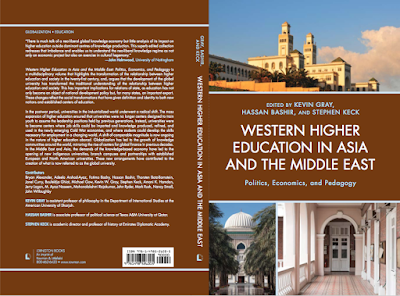 "Western Higher Education in Asia and the Middle East: Politics, Economics, and Pedagogy is a multidisciplinary volume that highlights the transformation of the relationship between higher education and society in the twenty-first century, and argues that the development of the global university has transformed the traditional understanding of the relationship between higher education and society. This has important implications for relations of state, as education has not only become an object of national development policy but, for many states, an important export. These changes re ect the social transformations that have given definition and identity to both new nations and established centers of education.


In the post-war period, universities in the industrialized world underwent a radical shift. The mass expansion of higher education ensured that universities were no longer centers designed to train youth to assume the leadership positions held by previous generations. Instead, universities were to become centers where job skills could be imparted and knowledge produced, re ned, and used in the newly emerging Cold War economies, and where students could develop the skills necessary for employment in a changing world. A shift of comparable magnitude is now ongoing in the nature of higher education aborad. Globalization has led to the growth of knowledge communities around the world, mirroring the rise of centers for global nance in previous decades. In the Middle East and Asia, the demands of the knowledge-based economy have led to the opening of new indigenous universities, branch campuses and partnerships with established European and North American universities. These new arrangements have contributed to the creation of what is now referred to as the global university."

“There is much talk of a neo-liberal global knowledge economy but little analysis of its impact on higher education outside dominant centres of knowledge production. This superb edited collection redresses that imbalance and enables us to understand the neo-liberal knowledge regime as not only an economic project but also an exercise in cultural hegemony.”
—John Holmwood, University of Nottingham

Mike Gow is currently Teaching Fellow in the Humanities and Social Sciences at Xi'an Jiaotong Liverpool University. Prior to his appointment at XJTLU, he was Global Postdoctoral Fellow at NYU Shanghai (2013-2015).  He received his PhD from the Centre for East Asian Studies at the University of Bristol.