The death of a Masters student in an industrial accident has brought the issue of student-supervisor relations to the fore.  Li Peng, a 25 year old 2nd year Masters student at East China University of Science and Technology (ECUST 华东理工大学) was killed in an explosion at a factory in Shanghai's Qingpu district on the 23rd May. 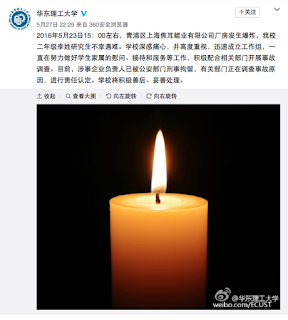 Sixth Tone have run an article which highlights the often exploitative tendencies of graduate supervisors in Chinese universities.

In Li's case, the accusation is that Li was prevented from working on the academic papers necessary for graduation, instead being cast into servitude, working for the firm owned by the supervisor. Li Peng's treatment is, sadly, all too common and the result of placing far too much power in the hands of academics, many of whom lack integrity. It is a system which, combined with the pressures of Chinese academia, creates and normalises industrial-scale academic misconduct.

I've spent my entire career in China, teaching at Chinese and Sino-Foreign institutions (the latter are by no means immune from this, but are often oblivious to it - in one case, I've helped a student enrolled on a UK PhD programme to submit their thesis when their Chinese supervisor, the Head of Department, was deliberately holding it up, causing extreme levels of stress to the student).
It has long been my belief that the greatest barrier to China's ambitions to create world class universities is the suffocation of academic talent in the early stages of their career, and the self-perpetuating reproduction of an exploitative hierarchical supervisor-student relationship.  Of course, there are excellent supervisors.  But China has way more than its fair share of nasty supervisors.  This is common knowledge and, more problematically, there seems little impulse to meaningfully reform this status quo.

I reproduce here a section from my PhD thesis which draws on an interview with a Researcher at a C9 university.  Corroboration of this information was found from a number of sources from grad students, all the way to university Presidents and every step of the academic ladder in between.  But my discussion with this researcher was formally recorded and permissions obtained.

While Li Peng was a graduate student at ECUST, my focus here is on the exploitation of doctoral students. However, the problems are clearly related and stem from the same unchecked power

8.1.3    Manifestations of Chinese Social Conventions in HE

My own observations in the field of Chinese HE lead me to believe that skill and ability in managing relationships according to the diktats of social conventions is substantially more important than academic ability or administrative ability, regardless of prevalent common sense opinions that academic ability is the most important factor.  Although academic ability is necessary, it is far from the case that individual academic performance is alone sufficient to bring success in the accumulation of the various forms of capital at stake in the academic field.  While performance in the gaokao, undergraduate and postgraduate examinations are necessary to enter the field of academia, the game changes substantially at the point of undertaking a PhD, and it is during this phase that the inculcation of norms of the Chinese academic sphere occurs.  What reveals itself is a system of selection on the basis of a willingness to conform to the unwritten social rules of the Chinese HE context.  It is a system which negates the potential for dissent and which demands conformity to the conventions of the hierarchies, the duties attributed to each role and the benefits commensurate with varying tiers of social status within the academic field.
One especially surprising admission made by President A, President B, Lecturer A, Researcher A, and which had been made clear in informal conversations and unrecorded interviews with several academics and administrative staff at various institutions, is that senior academics spend a very small proportion of their time on actual research.  This is especially the case for senior influential scholars, such as academicians (yuanshi 院士) and senior full Professors in receipt of large funding grants such as Project 863 and 973, but also for many Professors throughout the Chinese HE system without very high status levels but who are senior within their own departments and/or institutions.  However, the lack of research activity does not necessarily translate into a lack of publication activity, as the dynamics of the research team adhere to strict hierarchies and divisions of labour.  In discussion on the process of selecting young scholars for involvement in research projects administered by senior academics Researcher A offered some valuable insights into the accepted orthodoxy of Chinese academia at this level:

Co-signing of papers has been highlighted as a major problem and is rife throughout Chinese academia, with Professor Shen Hong (Shen, 2000:30) describing the practice as “widespread”, yet “unacceptable”.  Researcher A offers insight into the unwritten codes of conduct in the relationship between a PhD candidate and their supervisor.  To clarify, the term young researcher is interchanged here as many PhD candidates are funded through research projects of their supervisors:

MG:  As a young researcher, to what extent do you have any direction over the research projects in which you’re involved?

RA:  You just do as you are told.  You have no choice.

RA:  Refused? (laughter).  You would not be included in this research team.

MG:  What if, for example, ‘I disagree with the way we’re doing this research’? Or you suggest some other method?

RA:  In most circumstances, there is no chance for you to discuss this.  The direction has been determined before the research project was applied for.  PhD students in China, with some supervisors, have no chance to choose their own research interests.  Their thesis should be on a subject given to them by their supervisor.  If you’re unlucky you’ll encounter this kind of supervisor.  Its very bad.

MG:  What if you objected?

RA:  Its impossible.  If you don’t follow my directions you cannot get your degree early.  Firstly, your supervisor will agree you can get your degree, then college level, then university level.  Some supervisors are more open.  I just know many supervisors who do not allow the students to refuse or reject their decisions.
Researcher A (Interview 8)

This hierarchical and authoritarian relationship is also divided according to duties, as discussed earlier, whereby junior research team members are responsible for research and writing of papers and administrative tasks of the senior research staff, while the senior staff are focused on securing more resources. Researcher A, referring specifically to his own school at a C9 university elaborated on this point:

It's a very quick method for supervisors to write papers.  Senior scholars its not pressure, its their aspiration.  In Chinese universities, if I publish a top tier journal paper, I would be awarded 100 000RMB.  For one paper.  Sometimes shiwuwan (RMB150k).  There is method: cooperate with western scholars.  We just provide the data, they produce the paper.  They can be the first author, we can be the 2nd or 3rd author.  1st author: shiwan (RMB100k); 2nd author; wuwan (RMB50k); third author; liangwan (RMB20k).  It's a very big problem in China.  That's the reason Chinese scholars don’t want to cooperate.  I hate this.  It's the reason I don’t want to go a national university.  All the national universities.  All of them have the same reward system.
Research A (Interview 8)

RMB100, 000 at current exchange rates equates to roughly £10, 000.  It must be stated that further clarification confirmed that this bonus structure was particular to a business school at a C9 university, and is not necessarily the norm, but that it is common at prestigious business schools, with comparable publication bonuses being paid for publications in the top science journals.  Alarmingly, the order of authors’ names directly influences the bonus payable, with the 1st author receiving a substantially larger payout than the 2nd or 3rd author.  This information was also corroborated by a Professor at another well-regarded C9 university business school where bonuses were claimed to be even higher.
An impediment to change is the competitive advantage possible from having a small army of young scholars publishing.  Those senior scholars hoping to compete at the top tier of Chinese academia are compelled to maintain a productive research profile even when their time is taken up completely by efforts to secure ever more resources with which to conduct ever-larger research projects.  Yet, the substantial cash incentives available for publication in world-renowned journals can exceed a full year’s professorial salary for a single journal publication.  Even though these publications have amongst the most rigourous academic review standards (see Appendix 8 for a list of journals accepted by a prominent C9 university business school), in many cases PhD students are expected, prior to and as a condition of the completion of their studies, to publish in journals of this quality.  I had heard this from many PhD students and post-doctoral researchers and asked Researcher A to clarify the actual requirements of publication as a pre-condition of graduation:

RA: There is no quality analysis.  The only method is to look at the level of the journal.  Top Tier journals I have 3 publications.  Second tier, I have 2.

MG: But you are still doing your PhD?

RA: I should have 3 Chinese papers and one international paper.

MG: If you don’t have those papers, what happens?

RA:  No PhD.  Of course, no PhD.  They have listed 30 journals, Chinese journals, you should publish in only these journals.  International journals, they also have a list.  A, B, C level.

In Researcher A’s experience the bonuses paid for publication in journals as described above were not paid to the PhD student.  Even on these papers, published as a condition of graduating, there is a strong instance of co-signing of papers with the supervisor often placing their name first on the paper.  Researcher A, who was still finalizing their PhD at the time of the interview and had, at that time, a significant number of publications, including in journals listed in the Social Science Citation Index (SSCI) and the Chinese language equivalent, the Chinese Social Science Citation Index (CSSCI), stated that even those English language SSCI publications were not counted as they were in publications not ranked by his/her business school as of sufficient standing.  The extent to which this practice is prevalent across the Chinese HE sector is unclear, though Researcher A appeared adamant that in the elite universities, where publication stakes are high and competition is particularly severe, this practice is widespread.  It is difficult to resist the conclusion that such behaviour, if it is as widespread as I have been informed, is not only plagiarism on an industrial scale, but is a method by which research funds which must necessarily be spent on the training of young doctoral researchers is potentially and effectively laundered through a process which demands publication of papers by doctoral candidates as a condition of graduating from a doctoral programme, and for which the supervisor receives research credit and a financial reward.

The practices discussed above are indicative of the strength of informal structures in controlling and directing behaviour in Chinese HE, including most importantly the reticence over challenging established practices. As has been discussed earlier, the willingness to resort to use of regulatory and legislative means to resolve issues are subsumed by the need to maintain interpersonal harmony, especially for those occupying the subordinate position in dyadic ties.  As the above example of co-signing papers shows, there exists a strong resistance to shine a light on practices that most actors recognize as being morally dubious.
Posted by Mike Gow 高英智 at 03:19